As Investment Moves Overseas, the US Must Restore its Gold-Standard Patent System

Venture capital investment in the United States has declined steadily for years, as investors abandon an uncertain domestic climate for more reliable opportunities in foreign countries. In a report on the current state of the entrepreneurial ecosystem, the National Venture Capital Association emphasizes the extreme decline in the US share of global venture capital in the last twenty years, highlighting a drop from 83% of global share in 1996 to just 54% in 2015. At a time of decreasing investment, the US should be working to improve its innovation ecosystem, providing stable and effective property rights to inventors so that VCs can once again feel confident that investments in startups’ R&D—secured by patent rights—won’t just be stolen by established and better-financed infringers. Unfortunately, its doing just the opposite. Over the past decade, the US has continued to gut its patent system of the protections and incentives that attracted investment and made it the world leader in cutting-edge innovation in the first place.

While these numbers are certainly cause for concern, they don’t surprise patent law experts such as former Director of the USPTO, David Kappos, who sees the shift in investments as a natural result of the continuing erosion of IP rights in the US. He warns that “[w]hen investment incentives are reduced, you can expect investment to move elsewhere.” And although a variety of factors are likely contributing to the shift of investments outside of the United States, continuing to weaken our patent system will only aggravate this worrisome trend as VCs increasingly look outside of the US for better returns on their investments. The National Venture Capital Association made this point succinctly in congressional testimony back in 2015:

[M]aking it more costly to enforce patents … will have the unintended consequence of diminishing—if not extinguishing—the only true incentive that thousands of innovators presently have to invest the necessary time, money and other resources needed to create a new company from scratch. Put differently, the patent-backed right to own and profit from innovative ideas has been a major driving force for the American economy for 200 years, and that right requires that valid patents be fully enforceable in court at reasonable expense and without undue risk to the patent owner or its investors.

Though the United States has long been regarded as the world leader in securing stable and effective property rights in cutting-edge innovation, over the past decade the US patent system has been transformed by new legislation and misguided Supreme Court decisions. The US tradition of excellence in protecting and encouraging the development of groundbreaking technology has been replaced by a growing sense of uncertainty that is driving money, jobs, and innovative activity overseas.

Patents and related IP rights play an important role in protecting inventors and companies in the innovative marketplace against copycats, and they’re are absolutely vital to R&D-intensive small businesses and VC-backed startups, who are especially vulnerable to having their hard work stolen by larger companies. But as patentable subject matter standards have narrowed in the US, and as the enforcement of IP rights has become a risky and expensive (often impossible) endeavor, investors’ willingness to bet on small R&D-intensive businesses is quickly evaporating.

This troubling dynamic is hitting the most innovative industries the hardest—things like personalized medicine or foundational high tech R&D. Recent Supreme Court decisions have distorted traditional interpretations of patentable subject matter standards and shut the door on game-changing—and potentially lifesaving—inventions. And while the United States backtracks on patentable technologies, foreign jurisdictions are moving forward and encouraging the next wave of innovative breakthroughs. As the Wall Street Journal recently highlighted, China is now embracing advances in biotechnology that the US is rejecting—a trend that may soon result in China leading the world in the development of lifesaving therapeutics and cancer treatment drugs.

With little confidence in the ability of American companies to commercialize and protect their intellectual property rights, investment in innovative research and development has also shifted outside of the United States. As detailed in the 2016 G20 Innovative Report, R&D and patenting activity in the US has slowed as support for R&D and innovation experiences exponential growth in China and other Asian countries. In a Fortune Magazine article titled The Death of American Research and Development, Chris Matthews cites an OECD study that further illustrates this dramatic difference in R&D investment. 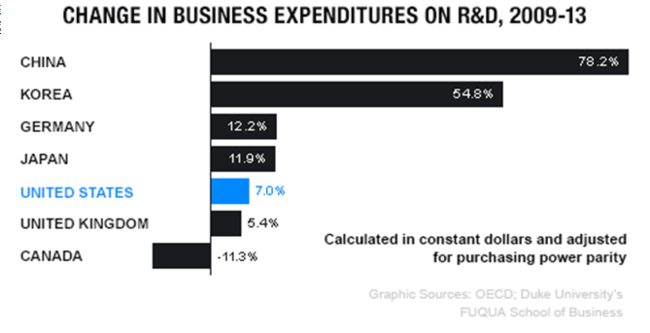 An extended decline of American R&D investment in innovative industries would be catastrophic, as the value added to the US economy by IP-intensive industries cannot be overstated. A 2016 Department of Commerce report found that IP-intensive industries—identified as industries that rely most heavily on patents, trademarks, or copyrights—are directly and indirectly responsible for 45 million jobs—30% of the US workforce—and contributed $6.6 trillion to US GDP in 2014. Additionally, the study found that revenues specific to IP licensing—a practice often carelessly maligned as part of the patent “troll” narrative—totaled $115.2 billion in 2012, with 28 industries drawing revenues from licensing.

As Adam Mossoff and I detail in a recent paper, the US is abandoning its “gold standard” patent system at the exact same time that international competitors are embracing the value and importance of patents. We highlight a database of over 1700 patent applications recently rejected in the US but granted in China and the European Union, including applications for potentially lifesaving technologies and therapeutic methods that could usher in the next great advances in medical science. While it may be difficult to judge the long term impact of recently-rejected patent applications in the US, it’s clear that the patent system is no longer the pioneering institution that led the way in the digital and biotech revolutions of the 1980s and 90s. A study released earlier this year by the US Chamber of Commerce ranked the US patent system tenth in overall patent system strength, a significant drop from its former position as number one.

The World Intellectual Property Organization also reports that China is now the main driver of growth in patent applications, recently becoming the first jurisdiction to have over one million applications filed in a given year. And in addition to more filings, China is now granting more patents—many in the dynamic software and biotech industries the US is neglecting. Not surprisingly, stakeholders have recognized these trends, as venture capital investments in China reached a record high of $31 billion in 2016.

To be sure, a weak and uncertain patent protection landscape in the US is not solely to blame for the movement of venture capital to China and other foreign jurisdictions. As Venture Beat notes in a recent article, VCs are also drawn overseas by lower costs (including labor), faster product-to-market times, massive and eager consumer bases, and efficient manufacturing infrastructure. But as a group of venture capital and patent law specialists recently explained at the Advanced Patent Law Institute held at the USPTO, one of the main reason investments are being driven overseas is because an insecure US patent system no longer adequately incentivizes domestic investment. Citing a study by the Kauffman foundation, former Chief Judge of the Federal Circuit Paul Michel warned that because most new jobs come from small start-up companies dependent on technology, if incentives to invest in these job creators are lost, the patent system and economy are in serious danger.

[A]s you educate them on the recent uncertainty and the drastic change in the [patentable subject matter] rules and what has happened with their patents, we were not able to provide them financing, nor was anyone else in the venture community giving them venture financing because then it became known that their product was unprotected, that anyone could copy it. So companies were put in bankruptcy or they had a fireside sale.

Across the globe, more and more countries are recognizing that the roots of a vibrant innovation economy lie in stable and effective intellectual property rights. And with countries like China able to offer all-around lower costs, faster production, and millions of eager consumers, it’s no surprise that investors will continue to eye “offshore invention” as a potentially lucrative investment opportunity. In light of this, the US should be working to make sure its patent system isn’t one of the reasons why money is streaming out of the country. If it doesn’t, the next wave of life-changing innovation—and all the economic benefits that come with it—will be realized elsewhere.

Stream Ripping Emerges as the New Face of Music Piracy

As formats change and advances in technology continue to transform the way we listen to music, new methods of pirating content are never far behind. What started with the analog dubbing and bootlegging of cassettes forty years ago... Continue →