Have Your Cake and Protect it Too: How Copyright Applies to Edible Art 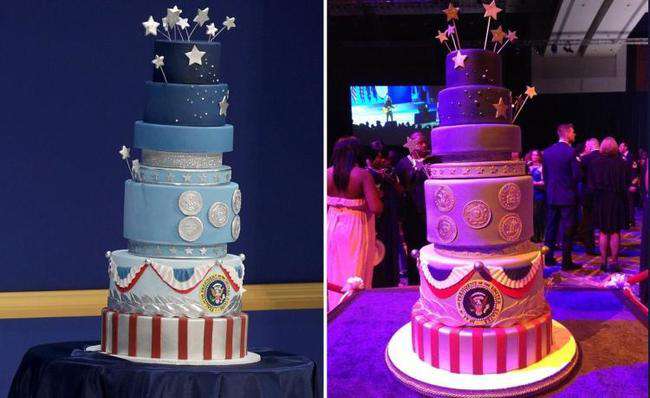 Amidst a flurry of inaugural ball appearances on the evening of January 20th, Donald Trump took a moment to participate in a cake cutting ceremony at the Armed Services Ball. Trump and VP Mike Pence – under the close supervision of a Coast Guard officer – used a saber to cut into an extravagant, nine-tiered cake. It was a towering and patriotic confection, worthy of a President ready to stop the carnage. But no matter which facts one subscribes to – mainstream, alternative, reality-based – there’s no denying the cake was a spitting image of a cake created for Obama’s 2013 inauguration festivities.

The day after the inauguration, renowned pastry chef Duff Goldman tweeted photos of the two cakes side by side, noting that he had made the original for Obama’s second inauguration four years earlier. The media quickly jumped on the story, claiming the design had been stolen and some outlets questioned whether Goldman’s cake had been “plagiarized” by Trump’s cake team. Not long after Goldman’s tweet, Tiffany MacIsaac – creator of the Trump inauguration cake and owner of Buttercream Bakeshop in Washington DC – admitted that her client had brought in a photograph of Goldman’s creation and asked her to replicate the design. Her admission eliminated any doubt as to whether her cake was intentionally copied from Goldman’s, but what remains unclear is whether her or her client’s actions violated any intellectual property rights Goldman may have in his original creation.

Food and the culinary arts can be murky areas when it comes to copyright law. Recipes – unless combined with significant literary expression – are simply a combination of ingredients, formulas and directions and therefor not protected by copyright. But the law is not as clear with regard to final culinary works that incorporate creative expression and original design elements. Other forms of intellectual property – such as design patents and trademarks – may be available to protect these creations, but what about copyright in the design of a cake?

Copyright law protects original works of authorship fixed in a tangible medium. While a cake may represent somewhat of an ephemeral medium, its consumable nature doesn’t affect its ability to accommodate a pastry artist’s design, if only for a limited time. While there has been debate over how long a work must be fixed to be copyrightable, Section 101 of the Copyright Act provides that a work is fixed if it “is sufficiently permanent or stable to permit it to be perceived, reproduced, or otherwise communicated for a period of more than transitory duration.” Notwithstanding the lack of a bright line rule designating a specific length of time a work must be fixed, the Copyright Office offers a broad interpretation of the duration requirement that affords copyright protection to all works from which an economic value can be derived.

The economic value derived from a reproduction lies in the ability to copy, perceive or communicate it. Unless a reproduction manifests itself so fleetingly that it cannot be copied, perceived or communicated, the making of that copy should fall within the scope of the copyright owner’s exclusive rights.

A cake created for sale by a bakery and displayed in a window would satisfy these requirements. Even if it was consumed the very day it was created, an opportunity to perceive – and subsequently recreate - the work has occurred.

Copyright law also gets a little more complex when three-dimensional objects are at issue. Section 102(a)(5) of the Copyright Act lists sculptural works as a protected class of copyrightable subject matter, but copyright will not be granted to useful or utilitarian objects. For example, if an artist chisels a statue to display as a work of art, there is no question that copyright would attach for the resulting creation. But now imagine the artist forms the same statue, adds some wires and a bulb, and creates a lamp. Is that work of art guaranteed the same protection as the sculpture? Well, it depends.

Considering objects that serve a utilitarian purpose – otherwise known as “useful articles” – copyright will not protect any mechanical or utilitarian aspects. But if those articles incorporate creative elements that are separable – either physically or conceptually – from the utilitarian features, copyright protection is available. If the sculptor’s creation could exist independently of the utilitarian features of the lamp, the work would merit copyright protection. In this scenario, the sculpture – even if not physically detachable from the electrical components of the lamp – could conceptually exist alone as art and could therefore be copyrighted.

This theory of the “conceptual separability” of useful articles recently found its way to the Supreme Court in Star Athletica v. Varsity Brands, which asks whether cheerleading apparel designs can be protected by copyright law. During oral arguments, Star argued that the designs on Varsity’s uniforms could not be conceptually separated from the apparel, and that because the designs are useful in that they are necessary to identify those who wear the apparel as cheerleaders, they do not merit copyright protection. Varsity countered that the designs are indeed separable as they appear on other clothing such as warm-up jackets and represent copyrightable pictorial, graphic features. It seems obvious that the uniforms and the pictorial designs could exist independently of one another, and that a cheerleader would still be identifiable as a cheerleader even if his or her clothing did not incorporate a simple design pattern. A decision in the case is expected sometime this year, and will be seminal for the future of copyright in clothing.

Applying this doctrine to the cakes, Goldman’s original design could certainly be separated from the cake – conceptually, if not physically. Removing the pictorial elements would not deprive the cake of any of its useful features as a consumable food item, nor would a removal of the design render the cake unidentifiable as a cake. It’s also worth noting that cakes are somewhat different than other food items in that it’s easier to affix designs and graphics to them, not unlike affixing a design to an article of clothing. Claiming copyright in design elements of foods such as ornamental dishes served in a restaurant could be difficult if the line between the food and the design begins to blur.

Complicating the matter is the fact that both cakes incorporated many federal seals in their design. These emblems are registered government trademarks and not original elements in which the cake creators could claim copyright. In addition to the seals, there were unique design elements that Goldman may have been able to claim were misappropriated by MacIsaac, but, instead of threatening legal action, he embraced the Trump cake as a tribute to his 2013 creation and praised MacIsaac for her skills in recreating it. It was a friendly gesture from a chef who has likely used others’ creations for inspiration and saw the situation as good publicity, but it’s important to realize that others may not be as forgiving. In this golden age of food, unique experimentation and presentation are pushing the boundaries of the culinary arts, and the cut-throat nature of the restaurant business might compel some to be more vigilant in protecting their work.

Last week, a group of law professors wrote a letter to the acting Librarian of Congress in which they claim that the current FCC proposal to regulate cable video navigation systems does not deprive copyright owners of the exclusive... Continue →