Earlier this month, an unprecedented worldwide cyberattack nicknamed WannaCry debilitated computer systems in over 150 countries, with the virus’s architects demanding payments to reinstate victims’ access to their own computers and files. The same week, hackers claimed to have stolen a version of the soon-to-be-released summer blockbuster Pirates of the Caribbean 5 and were reportedly blackmailing Disney under the threat of widespread online exposure. While the legitimacy of the Pirates of the Caribbean hack is now being questioned, it’s part of an alarming trend that recently saw hackers leak stolen Orange is the New Black episodes to piracy networks after Netflix refused to respond to coercive demands.

Some reporting on these brazen acts of extortion complain that they’re “damaging the image of piracy,” which they argue is dedicated to taking and distributing creative works for something “other than profit.” It’s a narrative that those involved in content theft have relied upon for years, insisting they are modern day digital Robin Hoods who steal works from evil corporations and distribute them to the lowly and oppressed public (never mind that the content is readily and affordably available through any number of legal outlets). But it’s telling that these instances of theft-based blackmail are on the rise as more and more illicit file-sharing and streaming sites shut down, discrediting hackers’ claims of a commitment to benevolent sharing and revealing that it’s always been all about the money.

Merriam-Webster dictionary defines piracy as “an act of robbery on the high seas” or “an act resembling such robbery.” It also offers this definition that captures the more recent association with intellectual property: “the unauthorized use of another’s production, invention, or conception especially in infringement of a copyright.” Despite the dictionary’s association of piracy with robbery, some skeptics insist that digital piracy is not theft because theft must include the loss of a tangible property. But as Devlin Hartline points out in his excellent examination of the conceptual legal foundations of theft and copyright infringement, those that argue the acts are unrelated disregard important shared traditional elements such as unlawful taking and interference with rights. As Hartline emphasizes, these critics do not understand that “any act that is inconsistent with the copyright owner’s exclusive rights deprives the owner of his property.”

Classifying infringers as “pirates” is a controversial notion in the digital age, with some arguing the label invokes a romantic image that betrays the criminal nature of content theft. Many operators of file-sharing websites that deal in the distribution of unauthorized copies of movies, tv shows, software, and music insist they are not in it for the money, and for some small-time site runners, that may be true. But with the rise of torrent giants like the Pirate Bay, Kickass Torrents, and Megaupload, the opportunity to reap substantial profits through ad hosting revealed the greed that drives the operators of these illicit sites. Look no further than the millions of dollars raked in by ExtraTorrent’s creator, or Megaupload architect Kim Dotcom’s extravagant lifestyle, to get an idea of what’s important to someone who’s built a business on copyright infringement.

With content thieves graduating from unauthorized distribution to direct extortion, and with global cyberattacks compromising digital assets, it’s more important than ever for copyright owners and creators to protect their intellectual property. In a recent report on increasing threats to IP, SmartFile, a secure file-sharing solutions provider, details how the collective creativity of the US is one of the most economically beneficial—and endangered—assets in the country.

The report stresses that countries such as the US don’t have copyright laws just to protect artists and authors, but to promote creativity in general and the ecosystems creative works facilitate. Pointing to a recent study by the United States Patent and Trademark Office and the Economics and Statistics Administration, the report emphasizes the substantial value “IP-intensive” industries add to the US economy. The study found that 81 IP-intensive industries accounted for 27.9 million jobs in 2014, with copyright-intensive industries representing 5.6 million. Another report by the International Intellectual Property Alliance found that copyright-intensive industries added more than $1.2 trillion in value to the US GDP in 2015, accounting for 6.88% of the entire economy. 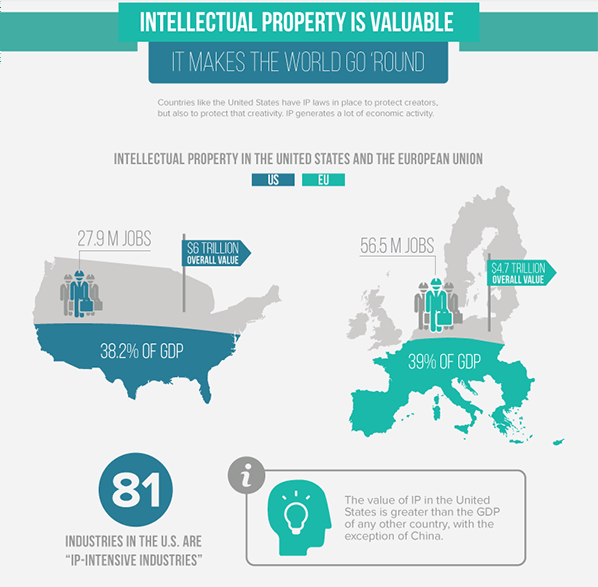 These invaluable creative assets are under siege by hackers and digital thieves both in the US and abroad, and, as the Smartfile study points out, it’s imperative for intellectual property owners and creators to focus their resources on safeguarding the fruits of their creative labors. But in addition to identifying threats and securing networks, it’s important to recognize what really incentivizes online piracy, because only when myths that evoke Robin Hood-like generosity are debunked will anti-piracy efforts succeed.

With the recent shutdown of file-sharing sites such as ExtraTorrent and with more countries blocking access to streaming sites, hackers and those facilitating online infringement appear to be focusing on new methods to profit from stolen content. And as this wave of theft and blackmail is completely disconnected from any notions of benevolent “sharing,” the new face of piracy is revealing that the true motivation behind the unauthorized distribution of copyrighted works has always been the almighty dollar.

Separating Fact from Fiction in the Notice and Takedown Debate

Cross-posted from the Center for the Protection of Intellectual Property (CPIP) blog. By Kevin Madigan & Devlin Hartline With the Copyright Office undertaking a new study to evaluate the impact and effectiveness of the Section 512... Continue →