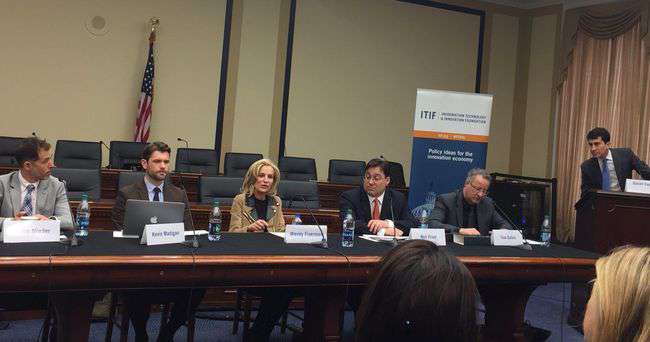 Last week, I had the opportunity to participate in a panel discussion organized by the Information Technology & Innovation Foundation on the growing problem of stream-based piracy. The panel, titled Unboxing the Piracy Threat of Streaming Media Boxes, brought together representatives from the creative industries, as well as copyright and cyber security experts, to explore the recent shift from unauthorized, torrent-based downloading to stream-based piracy facilitated by illegal media boxes. While the discussion touched on many aspects of copyright infringement, as well as legitimate content consumption in an era of on-demand streaming, the message was clear that the rise of illegal streaming devices (ISDs) poses a serious threat to artists, copyright owners, and the creative ecosystem.

The panel began with a demonstration of an illegal streaming device by Neil Fried of the Motion Picture Association of America. Having never seen one in action, it was both eye-opening and concerning to experience in person the way these devices operate. Almost any entertainment imaginable is available for immediate streaming with the click of a button—from movies to television shows to live TV and sporting events. Showing just how extensive the libraries of unauthorized content are, Fried searched for and immediately began streaming the works of fellow panelist Wendy Finerman, a producer responsible for such iconic films as Forrest Gump and The Devil Wears Prada.

Reacting to the demonstration, Finerman lamented the ignorance of—and frequent disregard for—what goes into the making of films and television shows. For many who engage in piracy, there is a belief that they’re only taking away a small payment from an already wealthy movie star or Hollywood studio, when in reality, there are hundreds of people whose work goes into the creation of these films—and whose livelihoods are threatened by piracy. Lost profits due to piracy are also threatening the existence of entire genres of movies outside of the slam-dunk blockbusters, as studios and financers have less capital to invest in riskier projects. As Finerman warned, it’s a trend that is leaving some of the most stimulating and rewarding stories untold.

Tom Galvin of the Digital Citizens Alliance then spoke on the challenges of living in a world in which more and more devices are susceptible to malware and to hackers looking to profit off access to our personal information and data. Galvin warned that when ISDs are brought into our homes, we not only risk exposing sensitive data, but also allow for the compromise of the microphones and cameras inside our devices. The cyber security standards that we have come to rely upon from legitimate, brand-name devices simply do not exist with ISDs and the open-sourced software they employ, and using these unregulated devices carries serious risks such as identify theft and blackmail.

Detailing these security issues, Kurtis Minder of the cyber security reconnaissance company GroupSense explained that thriving markets exist on the dark web for the weaponized malware that is often found in ISDs. Minder explained that the manufacturers and distributors of these devices take a hands-off approach to the security of their products, claiming they have no responsibility for any breaches or malware attacks that may occur after the sale.

The discussion then shifted to how the spread of ISDs and stream-based piracy can be prevented at a time when some organizations are characterizing piracy as mere “cord cutting.” The panel agreed that paramount to this effort must be campaigns that not only educate the public on the cyber security dangers previously discussed, but that also focus on the fact that using an ISD is theft that will have real consequences to the amount and quality of content that is created and made available in the future.

In addition to campaigns to educate, voluntary enforcement initiatives in which the creative industries work alongside government officials and legitimate digital platforms to identify and shut down bad acting device manufactures—as well as the sources of the infringing content—are imperative to fighting streaming piracy. Because the content is often delivered through apps that are developed and maintained outside of the United States, it is also essential for enforcement activities to involve foreign governments and for pressure to be applied to countries that have been more tolerant of copyright infringement and intellectual property theft in general.

The panel ended with a question and answer session in which panelists reiterated how illegal streaming devices pose a serious threat not only to consumers, but to the iconic American industries and creative works that drive our economy. As Wendy Finerman noted, Forrest Gump was a film that took ten years to complete and involved significant risk in the form of continued investment. Unfortunately, as creative industries have had to reshape the way they do business in the face of piracy, it’s uncertain whether a project like that would be possible today.

A full video of the panel discussion can be found here. The photograph featured above is used with permission from and attribution to the Information Technology & Innovation Foundation.