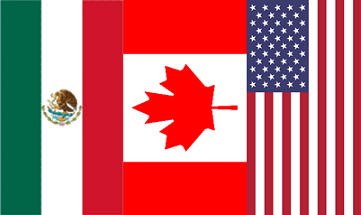 Last week, the fifth round of the North American Free Trade Agreement (NAFTA) negotiations closed in Mexico City with tensions high and little progress made towards a modernized trade deal. While the most recent talks saw the U.S., Mexico, and Canada discussing (and disagreeing over) ways to resolve trade disputes and rules governing automobile tariffs, earlier meetings have focused on ways to update international intellectual property standards for the 21st century. And though it remains unclear how potential updates will take shape, it’s essential they give creators and copyright owners a fair shot at protecting their works, rather than reinforce an outdated system that promotes immunity for those who continually facilitate infringement.

Held in Ottawa in late September, the third round of NAFTA negotiations concentrated on intellectual property and used text from the Trans-Pacific Partnership (TPP) as a template for chapters on IP and digital trade—formerly called e-commerce. Following the talks, strong criticisms arose from the tech sector and their affiliate trade organizations, bemoaning what they considered a retreat from language confirming limitations on liability and exceptions to copyright that have allowed digital platforms and other internet intermediaries to avoid infringement accountability for years.

In a letter to United States Trade Representative (USTR) Robert Lighthizer, associations representing tech giants such as Google, Facebook, and Amazon, repeatedly call for NAFTA negotiators to commit to language from the twenty-year-old Digital Millennium Copyright Act (DMCA), which—according to the letter—would carry on the “balance” upon which their industry relies. Unfortunately, the letter fails to reveal that with every year that passes since the DMCA’s enactment, the scales tip further in favor of content users and intermediaries, leaving creators and copyright owners increasingly unable to control their works.

Critics of the recent NAFTA copyright discussions have accused the USTR of trying to advance proposals influenced by the “content industry,” which would make internet service providers (ISP) more responsible for removing infringing content and holding repeat infringers accountable. They’ve implied that the Trump administration has sided with Hollywood to promote a film industry agenda that’s tough on piracy, and they’ve claimed that it’s a policy that will come at the expense of free speech. But it’s a strange allegation to claim the current administration is somehow in cahoots with an industry it routinely derides, and it’s also one that has little to no corroborating evidence.

Reports have also surfaced that Canada, because it was not involved in early drafts of the sections on IP, is resisting using the TPP as a framework for the NAFTA updates. According to an article on the third round of negotiations, Canada prefers to use the original NAFTA IP language as a starting point for negotiations, augmenting it only with features of other agreements it has already signed onto. And while it may seem unreasonable to cling to an agreement written before an iPod existed, perhaps it shouldn’t be surprising that Canada would resist injecting more accountability into copyright law, as it has been notoriously weak on piracy and was recently recommended to be included in a USTR’s watch list of countries failing to implement international standards.

Before the IP talks in September, over twenty music industry organizations sent their own letter to the USTR regarding the NAFTA negotiations. In it, they stress that just as many tech companies have transformed from small startups to global titans over the past twenty years, the digital marketplace has changed drastically since earlier trade agreements. Respect for the contributions of the creative industries that was once the foundation of earlier IP policies has been replaced by the narrow agenda of a few powerful companies and interest groups that would prefer to keep the U.S. and its trade partners locked into antiquated guidelines. Instead of looking backward, the letter insists that NAFTA negotiators must look ahead to advance “an inclusive digital trade policy that capitalizes on the contributions of our creators to jobs, growth, and the U.S. competitive advantage in trade.”

To be sure, stakeholders in any sector involved in international trade want to see a NAFTA agreement that will benefit their individual companies and industry as a whole. But for those representing the interests of internet intermediaries who wish to shackle North America to regulations that have been become severely outdated in the age of lightning-fast technological advancement, the questions becomes: What will be the cost of unbalanced, continual benefits to these entities? Because for all the talk of maintaining balance between content creators and those whose business model relies upon the unfettered access and distribution of content, it’s clear that grasping at the obviously obsolete standards of the DMCA leaves creators and copyright owners in the lurch.

As renowned filmmaker Ron Maxwell recently described in an op-ed about the current NAFTA negotiations, now that the once intoxicating allure of Silicon Valley has started to wear off, it’s time to stop watering down our copyright policies so that a few can profit off the creations of many. Maxwell explains:

Silicon Valley is laser-focused on diluting the copyright language in the treaty and is arguing for broad and unchecked “safe harbors” — from copyright infringement as well as all other illegal activity perpetrated on their platforms. Why in the world do they deserve immunity from the same responsibilities everyone else must shoulder?

The reality is that the companies arguing for exceptions are no longer exceptional, and they should be subject to the same rules as any other entity that wishes to access, reproduce, or distribute copyrighted content. To allow otherwise would mean turning our back on the American cultural exports that have truly changed the world.

Malware, short for malicious software, has been used to infiltrate and contaminate computers since the early 1980s. But what began as relatively benign software designed to prank and annoy users has developed into a variety of hostile... Continue →