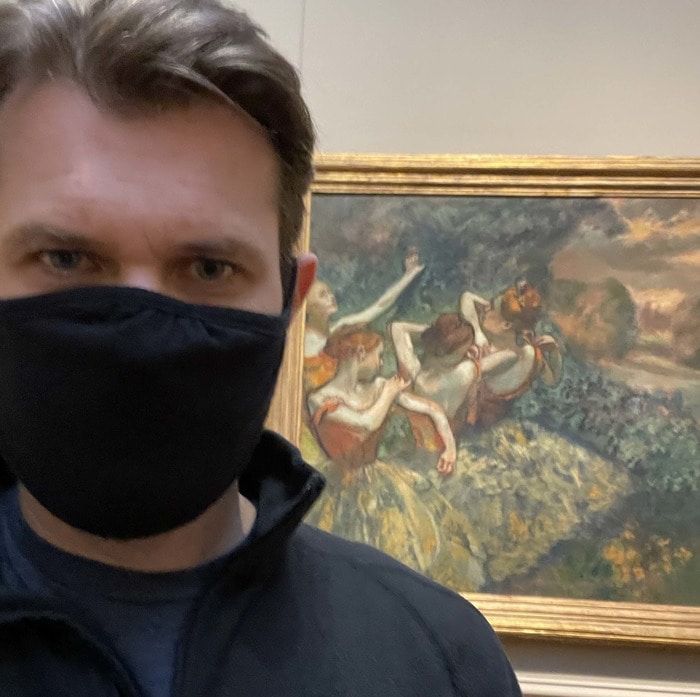 One of my favorite artists is Edgar Degas. His ability to capture intricate movements—most notably in his renditions of ballerinas—dazzling use of color, and command of composition is unparalleled. While he rejected the Impressionist categorization, he was without question a master draftsman and painter who stood out amongst his late 19th century French counterparts.

My favorite painting of his is Four Dancers (pictured above). Completed in 1899, it’s considered one of his most ambitious works, and it’s also one of his largest at about 6x7 ft. framed. It depicts a group of dancers (just off-center) juxtaposed against trees and a pastoral landscape that rolls into the background. The sharp lines of the subjects’ upper bodies stand in stark contrast to their natural surroundings, complimented by vivid green and orange hues.

I first fell in love with Four Dancers after seeing it in photograph form in art history books and online, and for years it was the background on my laptop. In 2002, I saw the real thing for the first time at the National Gallery of Art in Washington DC. It hangs in the middle of two smaller Degas’ on a wall on the main floor of the West Building and demands the attention of anyone in the vicinity. As any art lover knows, it’s hard to describe seeing a masterpiece up close and in person, but suffice it to say that I’ve been back many times.

Bearing witness to the original physical versions of great works of art can be tough, given that they’re scattered across the globe in museums and private collections. It’s a blessing that the internet makes it possible for us to view pretty much any piece of art whenever we want in a matter of seconds. But there’s nothing quite like seeing the texture and brushstrokes of a painting in person—not to mention sculpture, installations, and any other form of three-dimensional works.

The development of computer technology and the internet over the past three decades has brought with it new digital mediums, opportunities for display and distribution, and ideas of what art can be. In my opinion, works created, displayed, and housed exclusively in digital form can be just as moving and take just as much skill to create as any “traditional” physical work of art. Artists like David McLeod and Nik Ainley use computer generated elements to create world-renowned works that personify what is possible in the digital age. Experiencing an “original” version of their works “in person” takes on an entirely different meaning—or may actually be meaningless.

In addition to blurring the lines around how we experience art, digital works bring with them questions about what it means to own something that essentially exists as a series of zeros and ones on a server somewhere or in the cloud. Can you really own that work in the same way you would something that’s framed on the wall? Maybe not, but that hasn’t stopped the development of a healthy market for digital works. Add to that the advent of the blockchain, crypto, and now NFTs, and ownership of digital art is more relevant than ever.

In theory, non-fungible tokens (NFTs) aim to make ownership of an asset—whether it be a work of art, collectible, or anything else under the sun—transparent and verifiable. To understand exactly what NFTs are and some of the intellectual property implications see here and here, but in short, they are unique certificates that reside on the blockchain. One of the most common misconceptions is that an NFT and the underlying asset it represents are one in the same, or that the NFT houses a digital work. Not so. An NFT is simply a certificate of ownership and/or authenticity. It’s a digital record of a transaction that lives on the blockchain, while the digital work usually resides on a server that’s “off-chain.”

Many don’t realize that NFTs can also be proofs of ownership of a physical asset. I can create a painting on canvas and sell it to someone by means of an NFT. The physical painting may go to the buyer or it may not, it could be further distributed or reproduced, licensed, or even destroyed. Any terms or conditions of ownership can be incorporated into the NFT, which acts as a smart contract that can ensure attribution and even compensation for the original artist after subsequent transactions. That means there is a lot of potential to NFTs as they relate to art and artists, but there are also some worrisome trends.

In recent months, NFT markets have exploded online, and everyone seems to be rushing to get in on the trend. You can’t spend more than a few minutes online these days before coming across an ad, story, or clickbait link related to NFTs. Tales of massive value appreciation in short periods of time are abundant, and they are fueling a flurry of digital transactions. Speculation is king—not unlike cryptocurrency markets or any other market, for that matter.

To be clear, the value of any work of art is only what we decide as a society to assign it. Sometimes that value is attributed to undeniable artistic mastery, but it could be (and often is) tied to things like the fame of the artist, rarity, novelty, shock-value, or any other number of intangibles.

So what’s different about the current NFT market and the digital works that are attached to the transactions? To be sure, there are plenty of NFTs that represent the sale of interesting and original artistic works, sports collectibles, rare items, and so on. But there is also a lot of activity surrounding somewhat simplistic computer-generated images being created en masse. You’ve probably seen the images below consisting of some variation of a pixel art character.

While I won’t judge someone else’s artistic perspective or appreciation, and it’s difficult to know motives, it seems like the buyers and sellers of a large percentage of NFT aren’t concerned at all with the underlying creative work or an appreciation thereof. And that’s fine. Traditional art markets are full of people who are only interested in making money and couldn’t care less about what’s on the canvas.

What’s tricky about the current NFT craze is how we value the intangible works that are being created and sold. What is the value of something that I legally own, but that others can view and display in the exact same way that I can? It’s hard to say. Depending on the terms of the sale, the copyright owner of a digital work represented by an NFT could presumably stop others from reproducing or distributing the work, or violating any other exclusive rights guaranteed by copyright. But what exactly would the owner be stopping? If anyone can right click on a digital image and display it as they wish (although perhaps not publicly), wouldn’t that diminish the value of that underlying work? At an NFT conference that I recently attended, I heard someone say that the true value of an NFT is the “association” that the owner has with the underlying work. But it’s hard to see how that value wouldn’t be affected by the ease with which anyone could copy a screen shot or otherwise remove any metadata that ensures said association.

The current wildly speculative NFT market seems to be more about making a quick buck than anything else. Again, there’s nothing particularly groundbreaking about people trying to get rich quick by flipping assets with abstract values. But there’s a certain narrative promoted by vocal NFT enthusiasts that they are a revolutionary development that will empower creators in ways they never have been before. There may be some truth to that. NFTs have vast potential related to attribution and compensation in the art world, but we need to first get past the current phase that appears to be more about FOMO and greed.

At the end of the day, NFTs are records of transactions. But what they represent and the value we assign them can have a significant impact on creators and NFT owners. Whatever you’re buying, be sure to understand the terms of your ownership and and what rights you have or may have ceded. And if one day the satellites fall from the sky and the screens go dark, meet me in the West Building, Main Floor, Gallery 83.

In late January, it was reported that the “six strikes” Copyright Alert System (CAS) was coming to an end. Originally implemented in 2013, the CAS was the result of a voluntary agreement between Internet service providers and the... Continue →